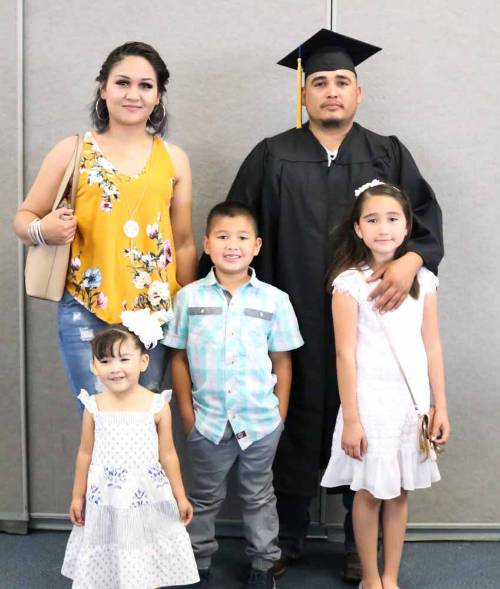 TVCC student Ivan Mendez was named the 2018 National High School Equivalency Program (HEP) Student Champion. Mendez was nominated by for the award by TVCC HEP Director Gianluigi Benvenutto and was selected from more than 50 HEP programs all over the county serving more than 6000 students.

In addition to receiving a $500 scholarship, Mendez will receive an all-expense paid trip to the National Conference in Puerto Rico to receive his award and share his story in front of hundreds of HEP/CAMP staff members from across the country.

“Ivan is a courageous, inspirational individual and he is so deserving of this recognition,” Benvenutto said.

Mendez came to TVCC looking for information about earning a GED a week after spending more than a month in a local hospital following a devastating industrial farm accident in Nyssa.  In October 2017, while unloading potatoes from a farm truck, Mendez’s arm became trapped in the conveyor belt. It took hours to extricate him from the machinery and after a series of surgeries, doctors were ultimately unable to save his dominant right arm.

Suddenly, Mendez was unemployed, disabled, facing a long recovery and a mountain of unexpected bills. He became a stay at home parent while his wife went to work. Initially, Ivan admits he was angry and felt hopeless, but he credits his resilience and his positive outlook on life pushing him forward.

In addition to learning new subjects, Mendez also had to learn how to write all over again using his left hand.

“He worked so hard to achieve his goal; we would see him in the mornings studying and later in the evenings,” Benvennuto said. “He spent an average of five hours per day in our building studying on top of the regular classes required by our program.” After four months in the HEP program, Mendez completed his GED.

Asked what motivated him to obtain his GED, Mendez said he wanted to set an example for his family that “no matter what happens in life when you have a goal in mind, nothing will keep you from achieving that goal.”

He said he appreciated the TVCC HEP program because it became a support system. Focusing his attention on passing his next subject, kept his mind busy and away from thinking about the loss of his arm, medical complications and the number of bills he needed to pay.

“He was able to see the positive side of his terrible accident and told us that if it weren’t for his accident, he would not have sought to continue his education,” Benvennutto added.

As a result of his efforts, he is currently taking Intermediate ESL classes and is back to work at the same ranch.  Now after obtaining his GED he was offered a supervisory position and is no longer working in manual labor. With his future improved, Mendez plans to continue improving his English skills and eventually obtain a college degree.